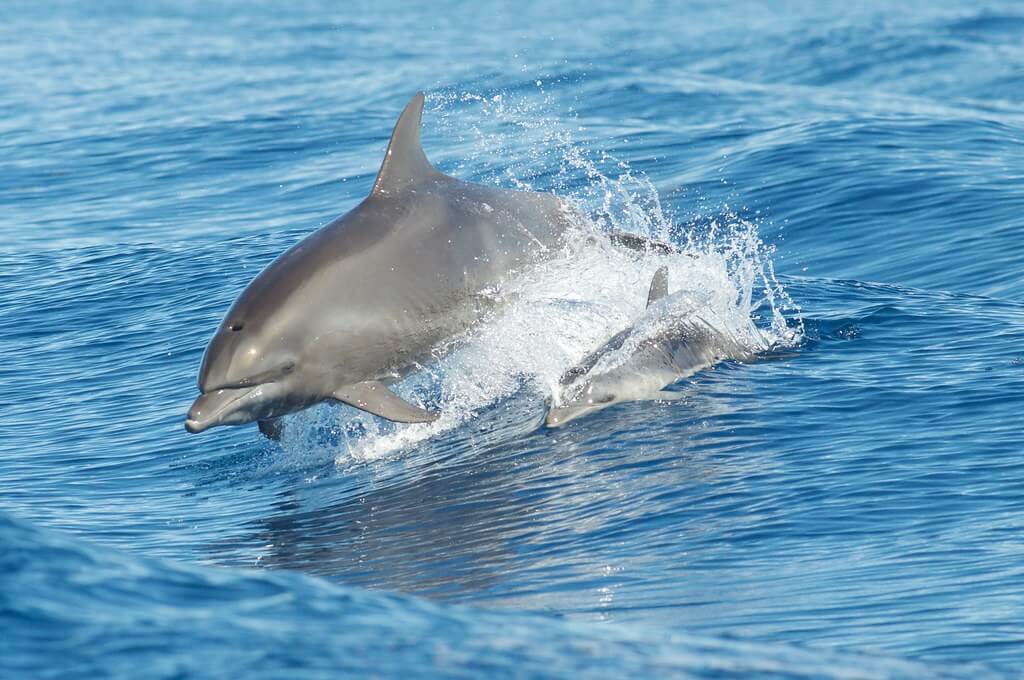 07 Dec What’s The Most Popular Dolphin In South Carolina?

Posted at 21:02h in Dolphin Cruises, dolphin facts by bluewave2

What’s The Most Popular Dolphin In South Carolina?

There are more than 45 species of dolphins, but the most common along the South Carolina coast is the Bottlenose Dolphin. If you take a dolphin cruise in Murrells Inlet, you’ll see this particular species playing and gathering food. The dolphins can be seen leaping from the waves and swimming just off the beaches.

The South Carolina coast bottlenose dolphins, scientifically known as Tursiops truncates, are generally solid gray on top with lighter bellies and sides. These marine mammals can reach six to twelve feet in length and top out at more than 400 pounds. These dolphins are the most common marine mammal along the South Carolina coast and exist in two types: offshore and coastal.

The offshore Bottlenose Dolphins live near the edge of the continental shelf, while the coastal mammals are known for living within a few miles of land. The body shape and size of these two types of Bottlenose Dolphins vary slightly. Some of the coastal dolphins are resident, meaning they stay in one home year-round, while others of the same group can be transient. While dolphins typically don’t migrate far distances in large numbers, they are very social and prefer to be around other dolphins.

The Blue Wave Adventures team is an environmentally responsible dolphin tour in Myrtle Beach, so we will never feed the dolphins during the tour. We respect the animal’s home and allow them to space needed to not become dependent on human’s for food. The Bottlenose Dolphins that live along the east coast take part in “strand feeding.” It’s common to see this type of feeding in Murrells Inlet during low tide. The dolphins will hurry onto mudflats, sending a surge of water ahead of them. Any fish caught in the wall of water are left stranded on the mud, allowing the dolphins to grab their meal. This type of eating is effective but also risky for the dolphins. It’s possible for them to get stuck in the mud or wear down their teeth due to eating mud with the fish.

The Bottlenose Dolphin can live to be 50 years old, but it’s our job to protect these water mammals to ensure they have a clean home for decades to come. Plastic in the ocean is one of the top killers of sea creatures along the Carolina coast. Beach cleanups, eliminating plastic bag and straw use along the coast, and being aware of how to interact with the dolphins can help support a long and healthy life for the creatures.

The Blue Wave Adventures team is highly skilled in working directly with dolphins. Each tour we offer is led by a knowledgeable marine biologist who will offer information about dolphins, sea turtles and other sea life throughout the tour.

We want each of our guests to enjoy the dolphins while respecting their home and need to hunt for food for themselves. We don’t feed, pet, or swim with dolphins on our tour, but we do invite you to bring a camera and capture some great memories, like these, captured by our team and guests. Learn more about the Myrtle Beach dolphin cruise and book your tour today.