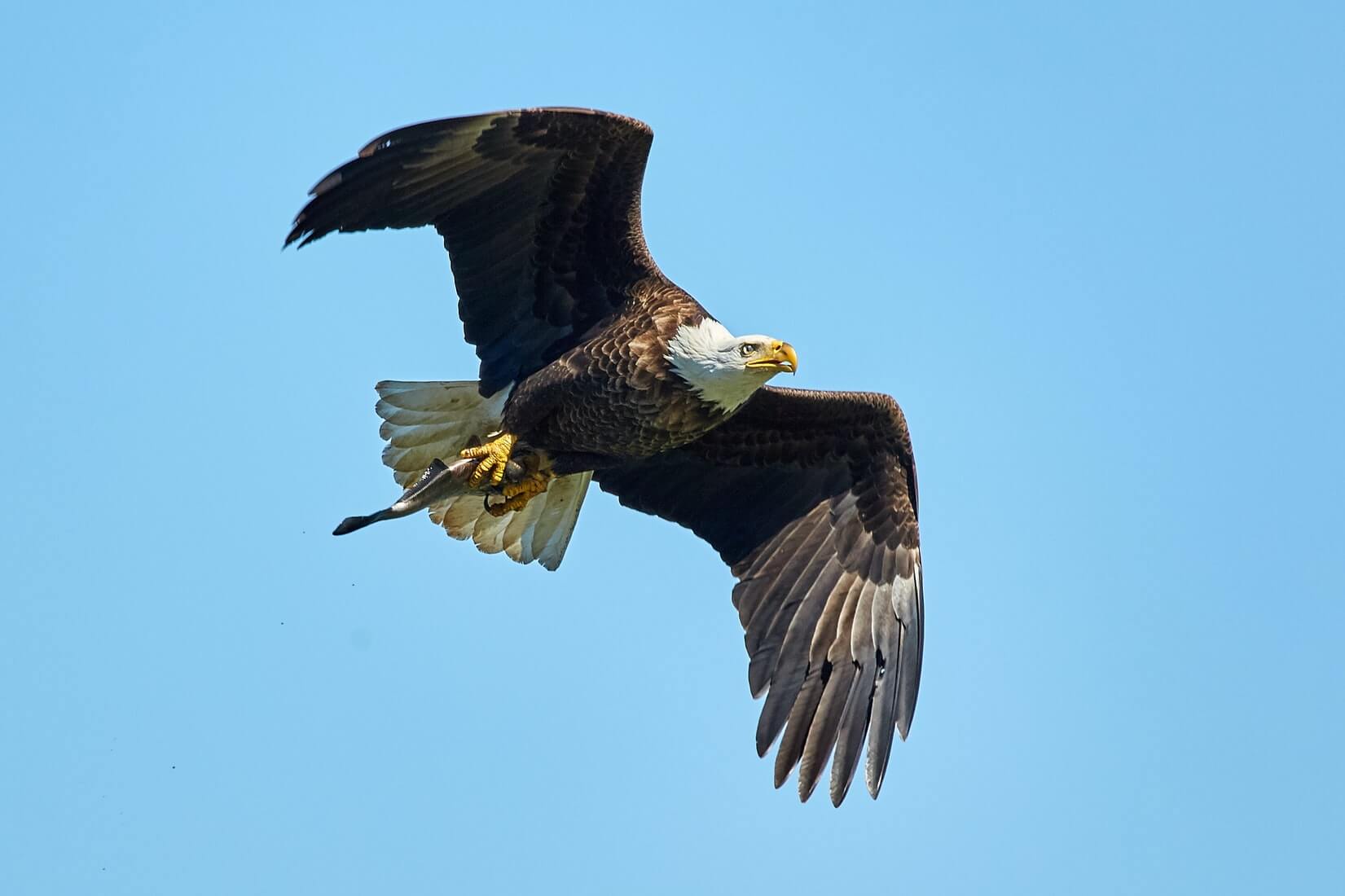 Posted at 18:52h in Dolphin Cruises by bluewave2

A trip to Myrtle Beach is about far more than adding a game of golf or a dolphin watch to your list of fun things to do. One of the most incredible things to see are the bald eagles soaring majestically throughout the skies. Why are bald eagles so prevalent along the Myrtle Beach coastline, you might ask? Well, for the fish, of course!

But bald eagles are birds of prey which means that they like to hunt and eat other small animals. Though fish are preferred, bald eagles have excellent eyesight and will often scope out small mammals such as raccoons or rabbits. It is true, too, that eagles have been known to binge on small cats and dogs, so if you live in an area suitable to the bald eagle way of life, it is essential to keep a close eye on small pets when they are frolicking outdoors.

This all said, with so many eagles flying high in the sky, it might be helpful to understand five fun facts about bald eagles in Myrtle Beach, especially if you are planning your Myrtle Beach summer vacation.

1. The bald eagle is our national bird

You likely already knew that the bald eagle is the national bird for our country, but have you ever wondered why? The bald eagle was selected as the national bird for the United States because it stands for authority and statehood. And, as we all know, the proud independence of this bird is intended to represent our strength and freedom in America.

If you have looked closely at the image of a bald eagle, or you have been fortunate enough to see one in person, you have probably noticed the plumage on the top of their head. Bald eagles have a yellow beak, white tail, and brown feathers with a white head. But why do they call bald eagles bald eagles if they aren’t bald? The answer isn’t all that exciting, it would seem, as it just so happens that “balde” is an old English word that simply means “white.”

3. Where will you find bald eagles in the United States?

Bald eagles tend to be found near large bodies of water because eagles tend to favor fish as their main dietary staple. Eagles also look for dense areas in trees so that they have what they need to create their nests. For this reason, bald eagles are commonly found in Myrtle Beach, South Carolina. Bald eagles are also found in Alaska and Canada, Florida, the Great Lakes states, the Greater Yellowstone area, the Pacific Northwest, and the Chesapeake Bay region.

4. Is the bald eagle still an endangered species?

Though the bald eagle was endangered at one point, populations improved in 2007, and it was removed from the official endangered list. However, the bald eagle is still a protected creature through the Bald and Golden Eagle Protection Act.

5. What are some other fun facts about bald eagles?

The next time you see a bald eagle soaring through the skies of Myrtle Beach, you may appreciate knowing that these birds live to be 20 to 30 years old in the wild. Further, they build the largest nest of any North American animals with nests weighing as much as one ton – that’s 2000 pounds! These nests may be as deep as 13 feet and as wide as eight feet.